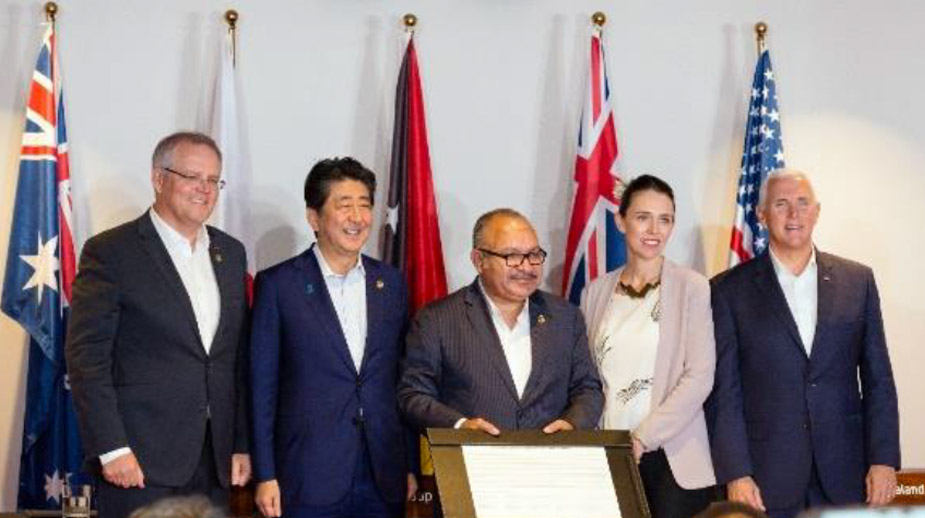 Image Caption: PNG Prime Minister Hon. Peter O’Neill (middle) with Australian Prime Minister Hon Scott Morrison (left), Japanese Prime Minister Shinzo Abe, New Zealand Prime Minister Jacinda Arden, and US Vice President Mike Pence who signed the PNG Electrification Partnership which aims to provide power to 70 per cent of the country’s population by 2030. Such outcomes from the PNG APEC 2018 will be discussed at the conference by the Government.

Papua New Guinea’s expanding resources industry will be showcased at a major conference to be held in Sydney next week.

The PNG Mining and Petroleum Investment Conference, widely regarded as the nation’s premier international conference, will be held from 3 to 5 December 2018 at Sydney’s Hilton Hotel.

The event will feature prominent speakers from the PNG government, mining and oil & gas companies.

Papua New Guinea has a well-established mining industry, attracting investment from many of the world’s leading mining companies. Minerals currently being mined include gold, silver, copper and nickel.

The upcoming conference is being hosted by the PNG Chamber of Mines and Petroleum, the industry’s peak industry body.

“This is the 15th conference we have held outside of PNG in Sydney. It is an ideal forum for potential investors to learn more about PNG’s mining and petroleum industry,” said Dr Albert Mellam, Executive Director of the PNG Chamber of Mines and Petroleum.

“We are expecting in excess of 1,300 delegates and over 50 exhibitors from resource and service companies, government organisations, landowner groups, the international finance sector and aid organisations to attend our 2018 conference.”

Under the theme ‘PNG Resources Industry: Investment and Partnership to enable PNG’s Growth and Development’, the conference will once again showcase the exciting developments occurring in PNG’s resources sector.

Speakers include the PNG Prime Minister, Hon. Peter O’Neill, along with a number of Government ministers who will provide delegates with insights into the government’s policies in areas such as energy and environmental protection.

Senior representatives from the country’s major petroleum and mining companies will provide updates on their current and proposed projects, new discoveries and exploration.

The conference also offers an opportunity to reflect on the recent APEC summit, which was held in Port Morseby earlier this month.

An important project to be featured during the conference is the country’s upcoming Papua LNG project, of which a Memorandum of Understanding on this project was signed by the project’s joint venture partners Oil Search, Total and ExxonMobil, and the PNG Government during the summit.

The Wafi-Golpu project, a 50-50 joint venture project owned by Australian-owned Newcrest Mining, and South African mining giant Harmony Gold which early works is expected to start in a few years will be a main draw-card for conference delegates.

The program for the upcoming Sydney conference features an international guest speaker in Professor Paul Stevens, a Distinguished Fellow at Chatham House, the Royal Institute of International Affairs in London. Prof Stevens will be providing valuable insight into the global oil and gas market, focusing on the outlook for PNG and its new developments.