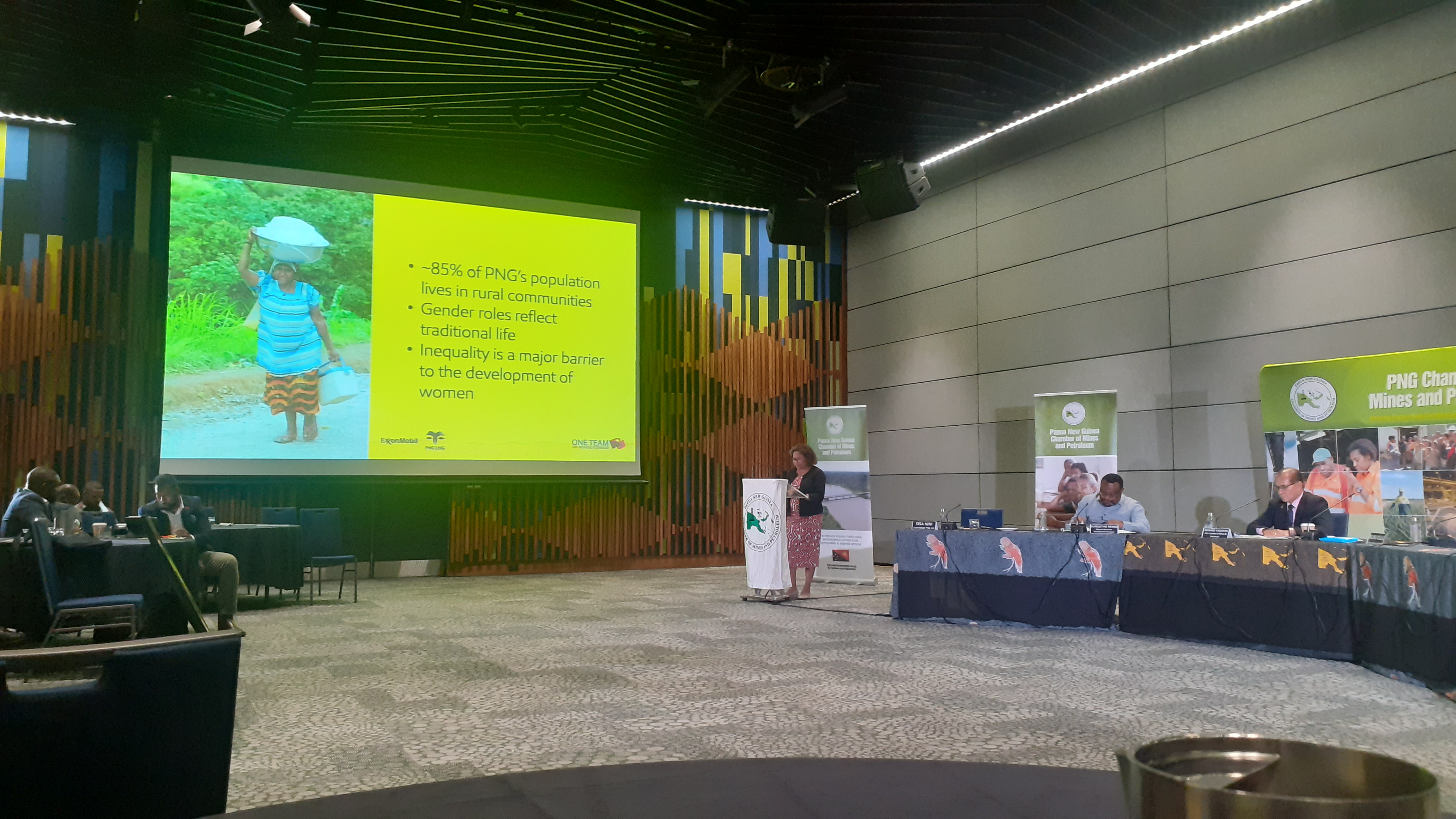 The PNG Chamber of Mines and Petroleum has congratulated the PNG LNG Project for being one of the foremost examples of developed projects which have an extensive footprint over the communities they impact.

The PNG LNG Project and its real socio-economic impacts, was the focus of the Chamber’s November Webinar Series, held today at the Hilton Hotel in Port Moresby.

The PNG Chamber of Mines and Petroleum has staged monthly webinars since August, in an attempt to continue public awareness and discussion on developments affecting the resource sector.

The focus on the PNG LNG project was to show the full impact of the project, not just in economic terms, but in the multiplied effect the project has on the skills development of Papua New Guineans.

“As we look at the PNG LNG Project today, an important point is for us to understand, that any resource project in the country, is a collective journey, which not only involves the development and extraction of resources, but the growth and development of Papua New Guineans. Something the future of the industry, will be built on,” Mr. Kassman said.

Mr Kassman reiterated the role of the PNG Chamber of Mines and Petroleum, saying it is committed to facilitating investment in PNG for the benefit of the Nation.

Guest speaker and ExxonMobil PNG Managing Director, Andrew Barry says the PNG LNGs K10bn contribution since 2014 has supported the country’s economy, highlighting a number of important figures, including K1.5bn in royalty payments to landowners, as well as almost K3bn in taxation.

“We share the PNG government’s goal of building the capacity of local suppliers and SMEs, and our efforts in this space continue to feature prominently across all aspects of the PNG LNG Project. As you heard from Kori Chan, we have passed on our values and standards help create a strong foundation for businesses to expand and broader local industry to flourish.”

With over 3000 Papua New Guineans employed in the project, 60 of whom are in management roles and 1/5 women, Mr. Barry says it has grown PNG business as well as created an avenue of developing leadership skills among locals.

“We now have a higher percentage of women working in our Operations & Maintenance group than any other ExxonMobil affiliate in the world.

“In September 2020, the entire shift at running our Hides Gas Conditioning Plan was PNG, from the Supervision and Control Room Operators to the Field Technician – an incredible milestone of which we are incredibly proud,” Mr. Barry said.

This, in turn, has led to an increased livelihood capacity for the communities along impact areas to develop, with K200m in investment towards heath and education, women’s empowerment, agriculture, sports, charities, sexual violence safe houses, as well as building and business support training.

“In partnership with landowner companies and the Departments of Works, we are also making ongoing improvements to infrastructure including upgrades to highways, roads and bridges. These upgrades improve not only the connectedness of local communities but also the safety for people across the region.”

He further added that the opportunities for growth in terms of better access to affordable energy and the resultant enhanced local business and Landowner groups growth, will overall lead to stronger economic growth for Papua New Guinea.

“Looking ahead, expanding our pipeline infrastructure for upcoming projects will not only unlock new employment opportunities for Papua New Guineans, but create opportunities for new commercial opportunities to drive and deliver long-term and sustainable economic returns to the country.”

The PNG LNG project is expected to be Papua New Guinea’s largest revenue generator, targeting an international market, while encouraging local employment, through the project itself, its service providers and third-party partnerships.

“We need the industry players, our facility depends on the oil industry”

Mr. Liria was recognizing the importance in synergy and relationship between the Kumul Petroleum Academy that creates candidates intending to work in the resource sector, and the potential employers that recognize the value of having a skilled, competent and local workforce capable of employment in an international arena.

The creation of a competent workforce in the mining and petroleum industry allows for growth.

This was also expressed by President of the PNG Business Council Nuni Kulu who said middle class earners of Papua New Guinea are the engine room of growth as they are not only active consumers, but big investors as well.

As a panelist in today's webinar, Mrs Kulu spoke of the "Ripple of Multiplier effects of a project such as the PNG LNG, and BSPs helping of landowners in the Edai Town project."

"The growth in the middleclass is in turn stimulating the national economy , with an increase in demand for financial services as SMEs and business look at expansion,” Mrs Kulu said.

She stressed that there is now an urgency to fire up resource projects so that members of the middle class can replicate and better the financially viable ventures such as the Edai town project among others.

Mrs. Kulu was one of two women on today’s webinar panel.

Having a career that has spanned over two decades has led her to appreciate the importance of having women participate in the Mining and Petroleum industry.

Presenting on 'Women's Empowerment through the PNG LNG Project" she said it is recognized that inequality is a major barrier to the development of women, and encourages more people to be part of the ''Women in Energy'' network.

With the number of women in the resources sector increasing each year, sustainability is an important and integral aspect of the growth of the country and its investors.

With Augustine Mano - Managing Director of the Mineral Resources Development Company and 3rd panelist in today's webinar speaking on the importance of sustainability when presenting "The Gas Resources and its work".

"We are bringing those people up so that they can see (when the project ends) that they are part of those development’s… It has to be sustainable , all these investments that we are doing is that 25 – 30 years from now when the LNG (project) is gone, the revenue is sufficient that it becomes sustainable for their quality of life.”

Webinar Chairman Kassman, was happy with the discussions.

“With this last webinar for the year, we managed to have three of the key players in the industry, in a project developer, the MRDC representing landowners, and Kumul Petroleum Holdings. All these parties, must continue to provide vibrant and vigorous discussions which will guide the future of our country’s resource sector. The government should also be part of these discussions,” Mr. Kassman said.