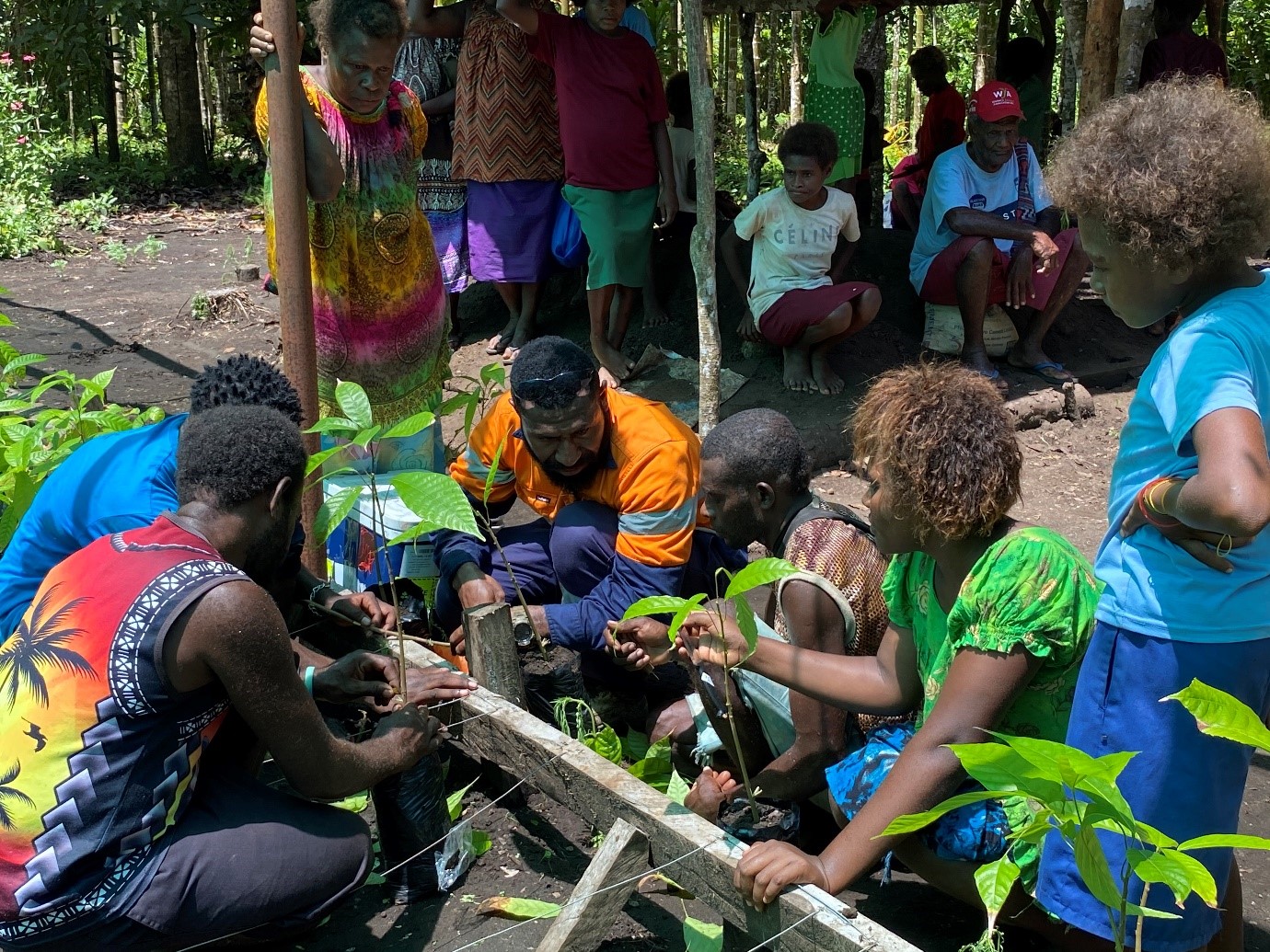 The product – labelled Tabar Chocolate – was produced by Paradise Foods’ Queen Emma Chocolate Factory from Simberi cocoa beans as a trial. According to Paradise Foods, Tabar cocoa has passed the test!

“Tabar cocoa has a nice fruity taste and is not smoke-tainted. It is a great start for the cocoa project,” said Karina Makori, General Manager at Queen Emma Chocolate, a subsidiary of Paradise Foods.

Simberi Mine owner St Barbara Limited reintroduced cocoa farming under its sustainable development program upon purchasing the mine in 2012. Planting began in 2017 and today, a total of 50 hectares have been planted on Simberi and Big Tabar islands. Simberi, Big Tabar, Tatau and Mapua islands form the Tabar Group in the Namatanai district of New Ireland.

Cocoa seedlings were jointly purchased by St Barbara, SMA and SMAA for distribution to farmers. So far about 120 family farmers are involved in growing cocoa.

In September this year under an arrangement with Paradise Foods, 30 kilograms of sun-dried beans from Simberi’s Pigiput demonstration plantation were flown to Port Moresby to the Queen Emma Chocolate Factory for trialling. The factory produced 1900 packets of dark confectionery which was distributed to the farmers and New Ireland and State government leaders to sample.

The chocolate, the first for New Ireland, and which has been publicized on social media, has inspired more families to take up cocoa farming, according to Big Tabar cocoa farmer and St Barbara employee Tony Meka.

“People are getting psyched up to plant cocoa again. They had never seen this (finished product) before as PNG cocoa has always been exported to other countries to make chocolate and other products,” Mr Meka says.

“We thank St Barbara, SMS and SMAA for the initiative which we know is sustainable and will last longer than the Simberi gold mine if we continue to farm it.”

“We want to make sure that one day when the mine ceases operations, Simberi and the rest of the Tabar group are in a better place for St. Barbara having been there. It is important for us to create a sustainable future for our host communities of Tabar, the wider New Ireland province and the rest of PNG.

“St Barbara has five company commitments, of which one is ‘Stronger communities’. St Barbara strives to help our communities thrive, grow and prosper. We build meaningful relationships, as highlighted through this story, investing time and energy to ensure local communities are enriched by being our neighbours,” Mr Robertson said.

“We guide the farmers in all stages of cocoa planting and production. Cocoa is a delicate crop that requires high rainfall and right temperatures to flourish and it needs suitable trees to give it shade and protection from the sun and strong winds. The work is hard but also rewarding as we are seeing now with Tabar’s first chocolate product,” Emmanuel said.

New Ireland Governor Sir Julius Chan and Minister for Tourism and Member for Namatanai Walter Schnaubelt are supportive of the industry being revived in the province and grateful to St Barbara for driving the initiative. They encouraged St Barbara to continue collaborating with the community and the government for more sustainable development opportunities for New Irelanders.