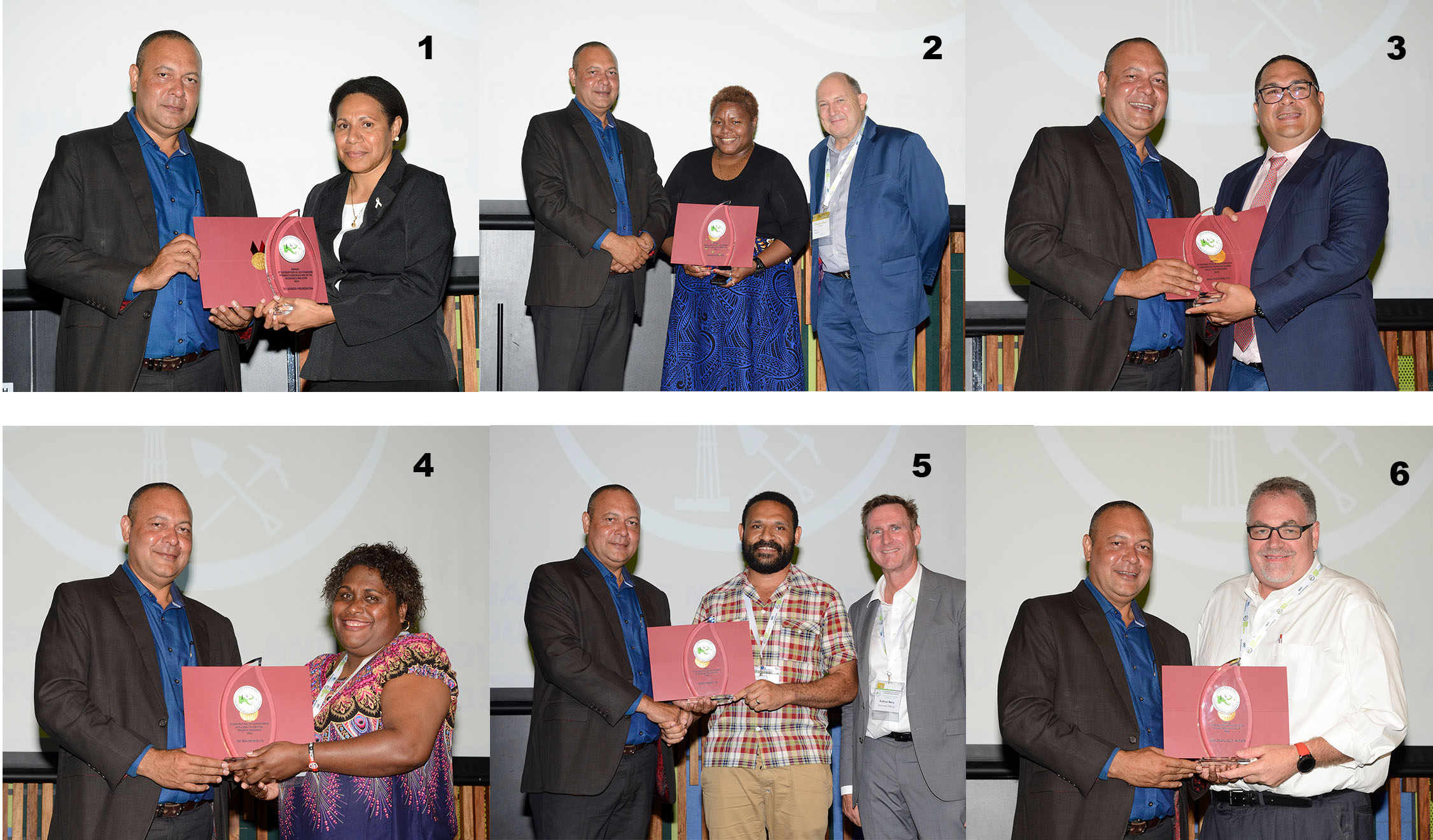 Image Caption: A picture collage of all the six winners of the Resource Industry Recognition Awards 2019 who each were presented their awards by Minister for National Planning and Monitoring Hon. Sam Basil.

The PNG Chamber of Mines and Petroleum last night reinforced the importance of the resource industry to Papua New Guinea by recognising six outstanding initiatives driven by industry organisations towards the development of the country.

These initiatives were recognised as part of this year’s Resource Industry Recognition Awards which was held in conjunction with the Papua New Guinea Mining and Petroleum Conference which began on Tuesday 3rd Dec in Port Moresby and ends tomorrow 5th December.

“The Awards reinforces the importance of the resource industry to Papua New Guinea as a big investor, not just in the mining, and oil and gas, but areas such as health, education, community infrastructure, employment, scholarships and training, agriculture, and SME,” the Chamber stated.

The winners for the Awards were:

1.     Oil Search Foundation who received the Outstanding Womens’ Contribution in the Resource Industry for their efforts in improving services and accessibility of family and sexual violence, labour services and conduct outreach immunization and ante natal care to women and children.

2.     International SOS who received the Outstanding Health and Safety Initiatives through their partnership with Newcrest Mining Limited where they launched a TB outreach program and increased the detection and improve treatment of TB patients on Lihir.

3.     NKW Group of Companies received the Outstanding Landowner Company Shared Value Performance. NKW is one of the only few success stories of landowner companies that have developed significantly from a small start-up to a nationally recognised company with operations around the country and in Australia. The company has also invested in a wide range of community projects and has notable investments in agriculture through its subsidiary NKW Fresh which has employed field extension officers to roll out farmer training to nearly 700 farmers.

4.     Ok Tedi Mining Ltd received the Outstanding PNG Local Content or Training Champion award for taking the lead in assisting the National Apprentices and Trade Testing Board recognise Belt Splicing as a trade. This was a significant improvement for the mining industry, and the hundreds of PNG nationals that work in this industry who can now have their belt splicing skills being certified.

5.     ExxonMobil PNG received the award for Outstanding Environmental Initiative for publishing two books summarizing scientific information about PNG’s biodiversity in areas where it operates in which one of the books was a report from the biodiversity surveys completed at Wau Creek, Uro Creek, and Lake Kutubu.

6.     Wafi Golpu Joint Venture received the award for Outstanding Humanitarian Initiative for its 'Mining Chocolate Program’ which is an epitome of a successful program and partnership with local communities in which local farmers were able to rehabilitate their cocoa plantations which are now producing high quality beans that are being exported internationally and also domestically where chocolates are now being manufactured from these beans.

The Chamber congratulated the winners, and thanked organisations who sent their entries for the Awards.

The Awards was first launched in 2018 in Sydney, Australia during the Chamber Mining and Petroleum Investment Conference.