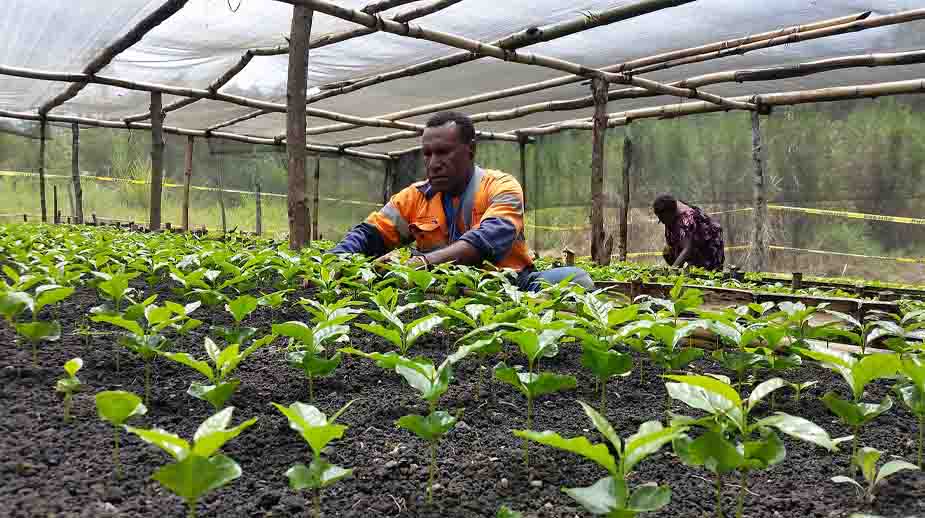 Image Caption: Coffee nurseries have been set up by Harmony in the project’s landowner villages to aid in the development of sustainable livelihoods.

Papua New Guinea’s future is at the crossroads with the Government considering a range of changes to the Mining Act that will deter investment in long-term mining projects and jeopardise the future success of PNG’s small businesses and citizens.

According to the 2019 World Bank Papua New Guinea Economic Update, one of the major risks to PNG’s projected economic growth is delays or impediments to future large-scale resources projects. As it stands today, mining projects across PNG deliver millions of kina in taxes and royalties, create thousands of jobs and deliver major infrastructure support to rural communities.

PNG’s existing mining laws have been critical in maintaining a world-class mining sector and attracting investment in PNG. Stable and supportive mining regulations have made the industry internationally competitive and allowed it to finance a range of valuable initiatives in project areas.

An example of this is the presence of Harmony Gold Mining who have contributed over 5 billion kina to the Morobe Province and national economy over the last 10 years through wages, procurement, royalties and taxes. Their support for regional   health programs has resulted in over 15,000 health examinations taking place  over the past year.

The PNG Chamber of Mines and Petroleum stated that the government must ensure that any changes to the revised Mining Act that is planned to be tabled in the current sitting of Parliament, must not scare and chase away mining companies and other international investors.

“When investment dries up, new mining projects will disappear taking with them millions of kina that would have been invested in schools, local businesses and health programs, which are investments projects have been making to most of the country’s rural areas,” the Chamber stated.

In order to continue this important work, the industry requires legislation that strikes a balance between national and investor interests. Mining companies will look to make future investment in countries with competitive and predictable mining regulations.

“Developing a new mine is a very costly exercise, and mining companies look at the fiscal and regulatory processes when deciding to invest, including whether the governing legislation is likely to change or not.”

“Unfortunately we are already witnessing declining exploration expenditure in PNG, and this can be taken as a strong indicator that investor confidence has dropped on the back of recent political changes,” the Chamber stated.

While the PNG Chamber of Mines and Petroleum supports the PNG Government’s prerogative to update the legislation to meet the challenges of the 21st century, it believes an independent review of the amendments must be undertaken to fully gauge the economic implications of the revised Mining Act on the economy of PNG.

“Mining has helped build our country over many years and to continue the substantial flow of benefits to the people of PNG our mining regulations must remain stable and supportive. The short and long-term future of our great nation depends on it.”