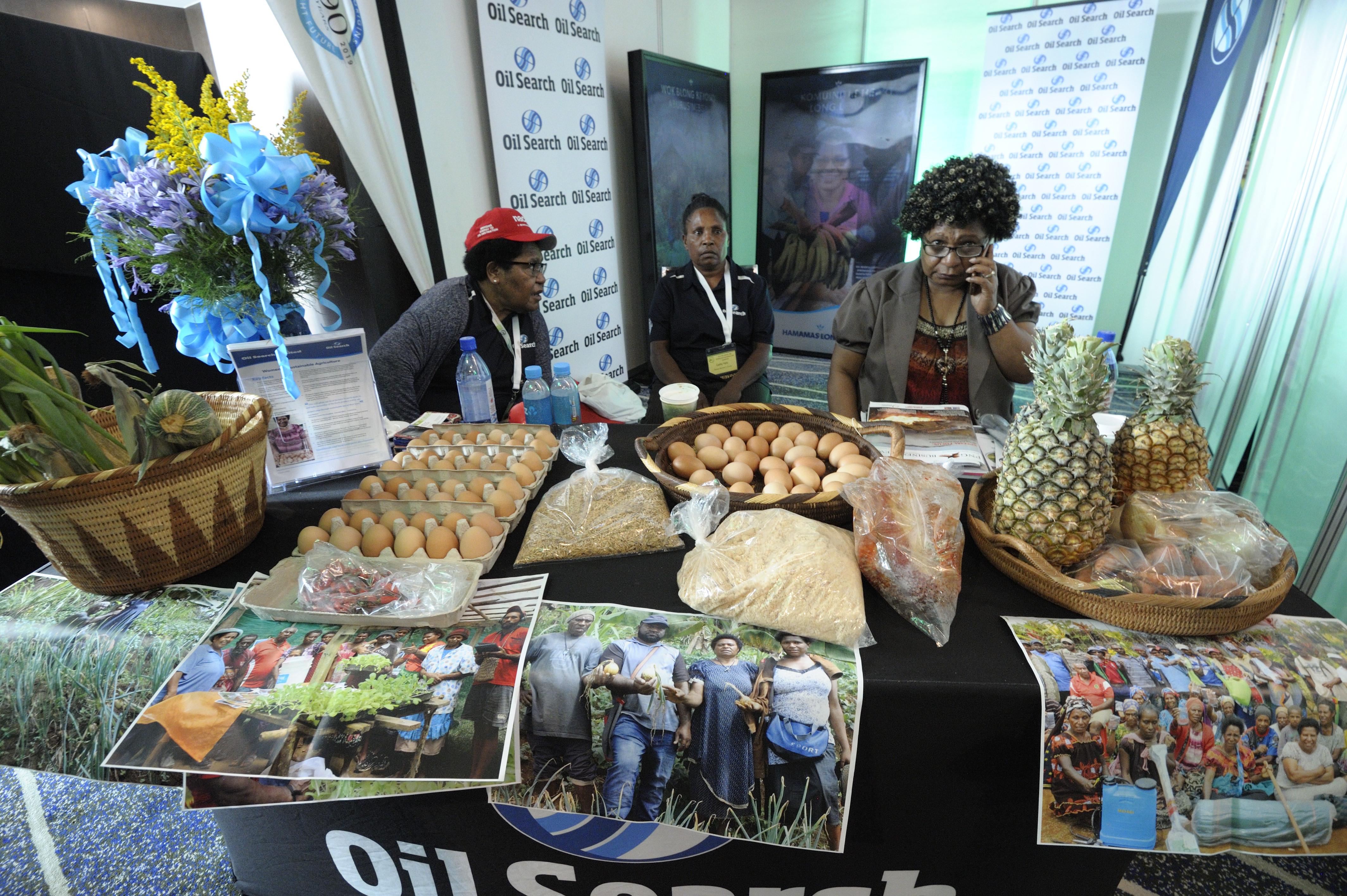 Image Caption: Oil Search Ltd displaying food being produced by women from its project impact areas at the conference.

The PNG Chamber of Mines and Petroleum has welcomed the Government’s announcement to consult the industry on the review of major resource laws of Papua New Guinea.

The Chamber made this statement today at the conclusion of the three-day PNG Mining and Petroleum Conference in Port Moresby following Prime Minister James Marape’s keynote address on Tuesday that his Government will consult the industry on the review of key legislations such as the Oil and Gas Act, and the Mining Act of 1992.

The Chamber stated that as an industry that has contributed significantly to the economy of the country as well as other key social areas in health, education, training, agriculture and SME, it was important that it help resuscitate the country’s economy.

“The industry is well aware of the financial challenges PNG is going through and we are happy that the Prime Minister has indicated his Government’s willingness to work with the resource sector to re-ignite PNG’s economic growth,” the Chamber stated.

“There are critical resource projects such as the Papua LNG, the P’nyang gas development and the Wafi Golpu project that have the capability to grow and consolidate our economy,” the Chamber stated.

“We are ready to engage and support the Government grow PNG’s economy whilst ensuring the country, its people, and industry investors receive a fair share from its mineral and petroleum resources. Critical to this partnership will be the need for the country to maintain a stable fiscal and regulatory environment that will attract genuine investors who can bring in the much-needed capital,” it stated.

Mr Marape’s commitment was further reaffirmed by the Mining Minister Johnson Tuke yesterday who invited all mining companies to work with the Government to ensure the country and the investors receive their fair share of the resource wealth.

Other notable speakers included Oil Search Managing Director Peter Botten who highlighted the significant potential for PNG to increase oil and gas production over the next five years through the development of Papua LNG, and P’nyang gas projects.

He said the benefits flowing from the resource sector can be used to facilitate infrastructure development, provide employment and training opportunities, fund key social sectors in education and health, and focus on critical areas including agriculture and youth engagement.

OTML Managing Director Peter Graham also highlighted during the conference the country’s mining opportunities which can attract quality investors to generate and share value, but stated that uncertainty in fiscal and other terms may drive investors elsewhere. Discussions during the conference were held in line with the event’s theme of Resources Industry: Developing Shared Value.

The conference saw over 900 delegates from the mining and petroleum industry in PNG and abroad, including Government and other key stakeholders attend.